The power of digital crowds extends beyond kickstarting and vigilanteism. As National Breast Cancer Month draws to a close, we take a look at how scientists are using social platforms and gaming technology to further cancer research. Plus: Oregon Ducks, hackathons, and the origin of symbolic pink.

Native ads. Brands as publishers. #BreakingBad. Target telling your dad you’re pregnant. Advertising may have lost its 3 martini lunches, but it’s gained a position at the forefront of both high-tech and narrative innovation. On this episode of Truth in Tech, we talk to Hill Holiday‘s Austin Gardner-Smith about the industry’s future, and the cultural and technological shifts behind it.

Want to guest star? Have an interesting tech topic, startup, or story of the week? Email us at elisek@softartisans.com! Or find us roaming the Twittosphere @elisekovi and @clairedwillett. 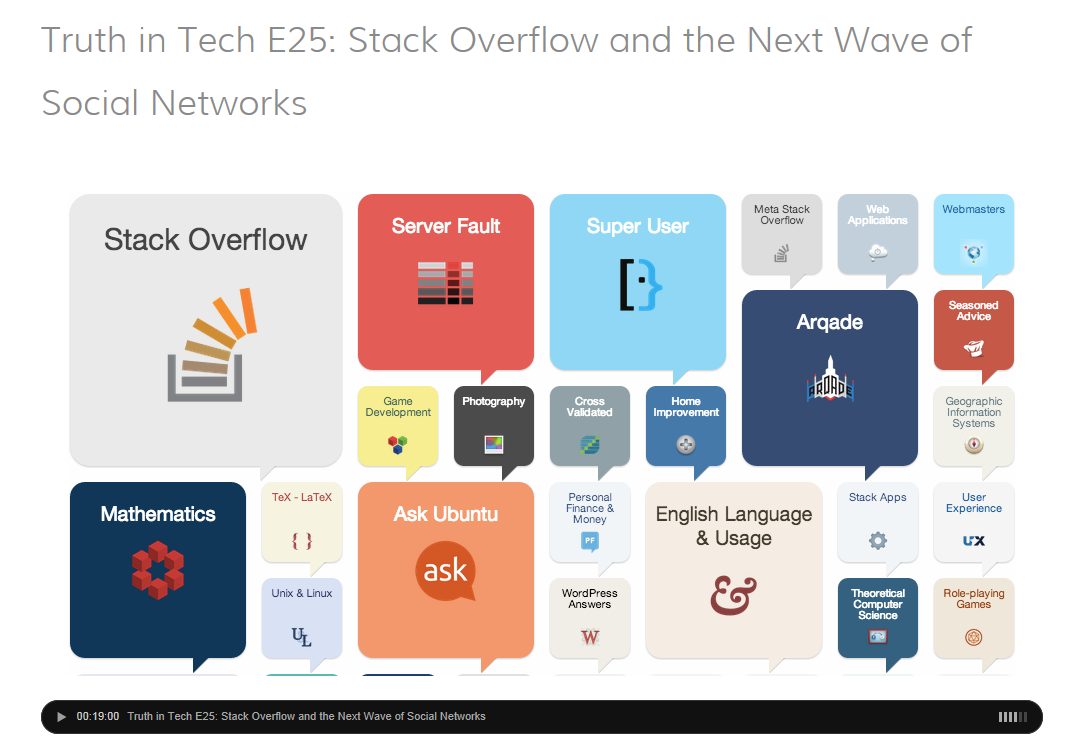 When Jeff Atwood and Joel Spolsky launched StackOverflow  in 2008, the site quickly became the place for programmers to ask and answer questions. Today, one site has become 105, and cryptographers, grammarians, and homebrewers have joined the original core group of programmers. StackOverflow users Nick Martin and Seth Moore guest star as we discuss what might just be the model for the next wave of social networks.

Want to guest star? Have an interesting tech topic, startup, or story of the week? Email us! elisek@softartisans.com Or find us roaming the Twittosphere @elisekovi and @clairedwillett.

Today, wifi and a streaming box will give you everything your cable subscription does (yes, sports included), for around $30-40/month. We go over your options, including AppleTV, Xbox, and Chromecast, Google’s new ultra-budget-friendly thumb drive. 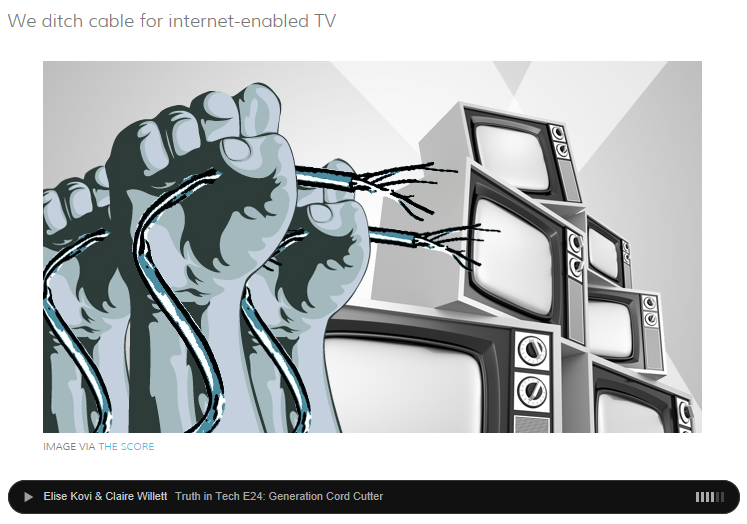 This week on Truth in Tech we roped in Mark Moschel and Eugene Granovsky, co-organizers of the Chicago Quantified Self Meetup group and owners of AskMeEvery. As featured in Mashable, LifeHacker and The Next Web, AskMeEvery is a way to track your activities and behaviors over time through daily questions, making you more mindful of the ways in which you spend your time. Listen as Mark and Eugene give us the scoop on translating your life into numbers. Where did it come from? What apps/devices are at the forefront? What are the types of people who track? Should we really be measuring everything? 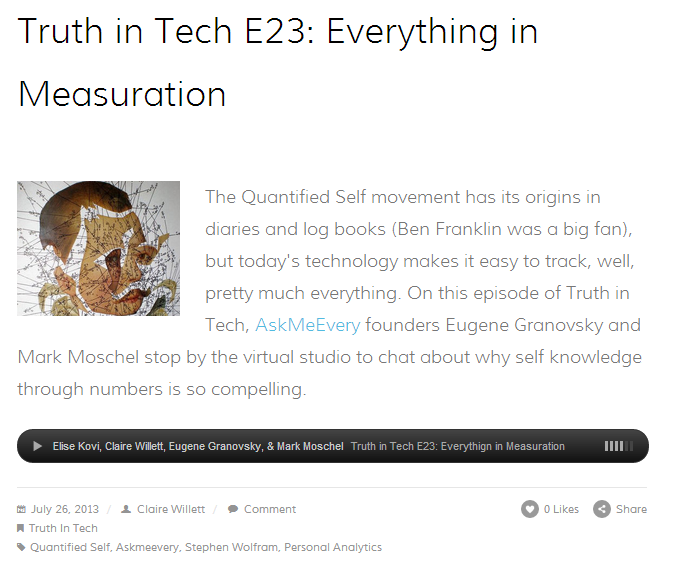 So you want to be a programming intern? Take it from these all-star students who’ve maneuvered the tech waters to land hands-on programming internships. They give you the inside scoop on where to look, secret interview questions, and what it’s really like at a summer internship. Listen in on itunes.

Truth in Tech E20: The InternshipTech internships have been getting a lot of play in the news and pop culture lately, but what are they actually like? Our summer interns spill the deets.

Our weekly Truth in Tech series, where we cover the week’s wackiest, useful, and just downright interesting tech stories, is now available for download on itunes…for free. We sift through a ton of tech news on the daily. Usually we tweet about our findings, but 140 characters doesn’t leave room for much nuance. So buckle up, tune in, and join us as we uncover acquisitions, startups, apps and the ever-evolving tech landscape.

Your plumber called. He wants to know about those photos you have to share. The capped social network beloved by designers and San Francisco technorati alike has come under a second round of fire for its spammy adoption practices. On Monday END_OF_DOCUMENT_TOKEN_TO_BE_REPLACED

Our weekly series, Truth in Tech, is now a podcast! So you can listen at your convenience – at your desk or on-the-go.

Claire and I wade through a lot of tech news. Usually we tweet about what we’re reading, but 140 characters doesn’t leave room for much nuance. So here we gather the most interesting tech stories from startups to tech giants to acquisitions to delightful new apps, and breakdown what they all mean for the startup scene. On the slate this week:

In Boston: Hubspot Acqui-hires 2 companies on their way to an IPO.

Our weekly series, Truth in Tech, is now a podcast! So you can listen at your convenience – at your desk or on-the-go.

Pinterest Buys Livestar: Livestar amalgamates reviews for restaurants, movies, and music from reputable sources such as newspapers, local news blogs, Facebook friends, or people in your contact list. The acquisition cost wasn’t revealed, but Livestar did have some top investors and $2 million in funding

Babbel Startup buys PlaySay: Babbel is a language learning startup. PlaySay is a English/Spanish learning app for the iPhone where you can have real conversations with pronunciation feedback. Again exact amount of buyout not revealed, but Babbel’s goal is to break into the US Market.

2. Google launches Keep on Android and Google Drive: Keep is Google’s version of Evernote that syncs to your Google Drive. It’s android only at the moment, but wired predicts an iOS version soon

3. The Senate Judiciary Committee held a hearing yesterday on the privacy implications of tiny, cheap drones.

“The drones, or unmanned aerial systems, have already helped the police find missing people and county planners measure the growth of a landfill. But they could also be used by drug dealers, pedophiles and nosy neighbors, the witnesses and a senator said.” Currently, only government agencies and police departments can fly drones, but the FAA will have rules in place for commercial use by 2015.

Claire and I filter through a lot of news on the interwebs. While not all of the stories are pertinent to what we do here at SoftArtisans and Riparian Data (see Gander and OfficeWriter), there is still a mind-boggling amount of industry articles worth talking about. To keep them from rattling around in our subconscious and to stay up-to-date on the latest trends (and because Claire and I don’t hang out nearly enough), a new series was born. Every week we’ll bring you an unbiased perspective on the ever-changing technology landscape, covering industry topics from mobile to startups to news you may have missed. So join the conversation as we talk acquisitions, new apps worth using, and anything else that tickles our fancy.

With two videos under our belts, we’re talking Instagram, Zipcar, and END_OF_DOCUMENT_TOKEN_TO_BE_REPLACED